How does a Helicopter Hover?

Helicopters are amazing, versatile inventions. Thanks to years of hard work and investment by serious men and women in lab coats, we have the technology to make thousands of kilograms of metal, fuel, people and luggage travel forward at speeds of up to two hundred miles per hour, and then stop and hover, supported by nothing more substantial than air, before alighting gracefully into areas not much bigger than a tennis court. It’s not hard to see why those who fly them gain a certain amount of well-deserved kudos for apparently bending the laws of physics.

But how do these fantastic flying machines hover?

The Physics of Defying Gravity 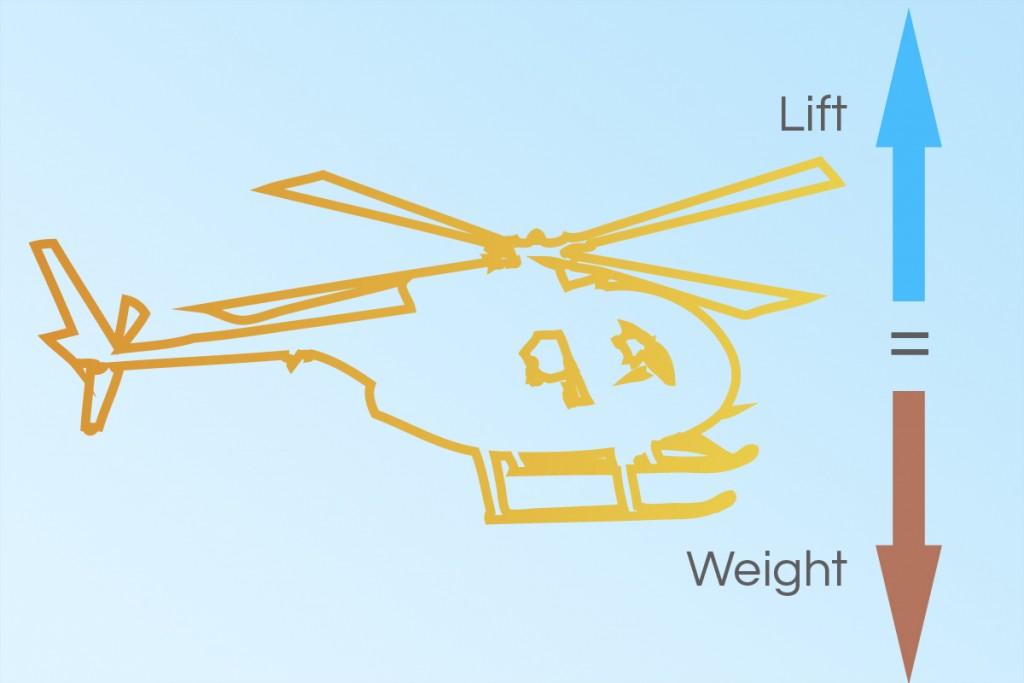 In order for an aircraft to stay airborne at a fixed height above the ground, it must produce a lift force upwards against gravity, equal to the weight of the helicopter. This allows it to maintain height above the Earth – if the helicopter produces more lift than its weight, it will climb, and if it produces less lift than its weight, it will descend.

Helicopters produce this lifting force by using an engine to spin a set of rotor blades at high speed, directly above the helicopter. These blades are essentially rotating wings; they force air downwards past the blades, which in turn pushes the helicopter upwards in the opposite direction, against the force of gravity. This allows them to lift people, cargo, or movie stars rescuing trapped photogenic hill walkers from ravines.

Don’t Spin Me Right Round, Baby 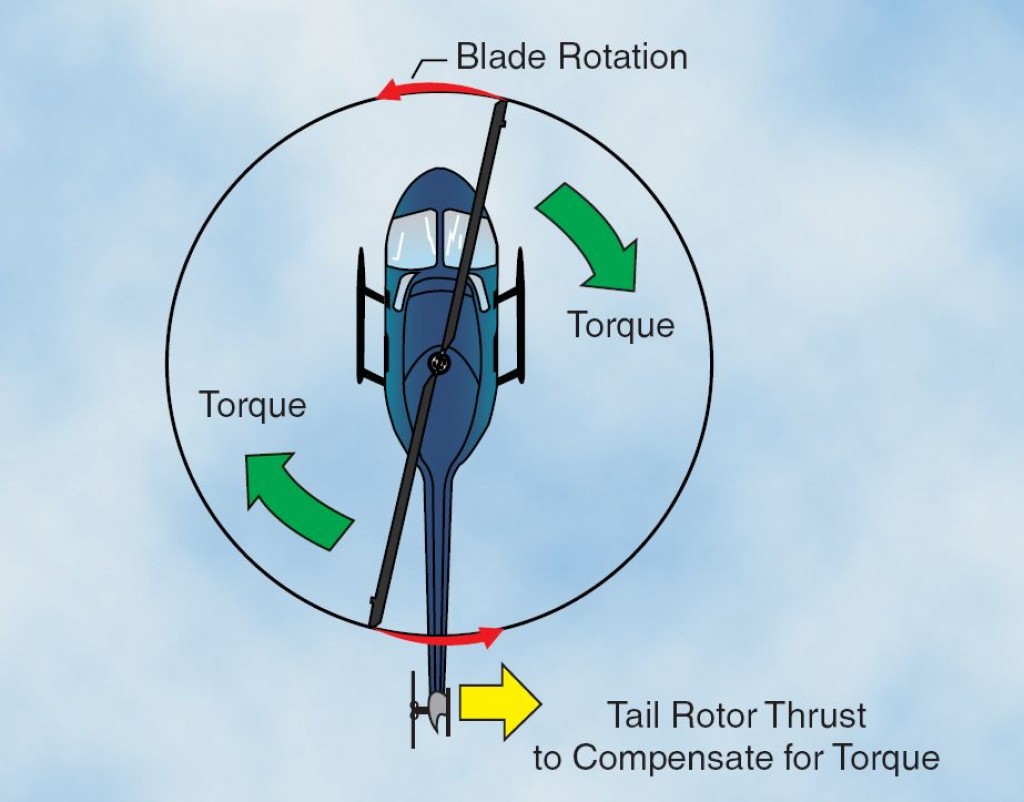 One Sir Isaac Newton insisted that any action produces an equal and opposite reaction (and he was usually right); as the rotor blades spin, the helicopter’s fuselage will try to rotate in the opposite direction to them. Since this tends to lead to much harder landings and dizzy pilots, helicopters use a number of design solutions to produce a counteracting force against this effect, which is known as torque.

Some designs, notably those by the crafty Russians, simply add a second set of rotor blades on top of the main set, and rotate them opposite directions, so both rotors create torque against each other and cancel each other out. However, the most common design is to add a rotor mounted on a tail boom away from and behind the fuselage. This tail rotor pushes against the torque effect – which stops the fuselage rotating.

The Act and Art of Hovering

These two sets of rotor blades are used to provide both the lift force and control of the helicopter’s movement in three dimensions, or prevent movement if the helicopter is in a hover. Control is provided to steely eyed helicopter pilots in four ways; 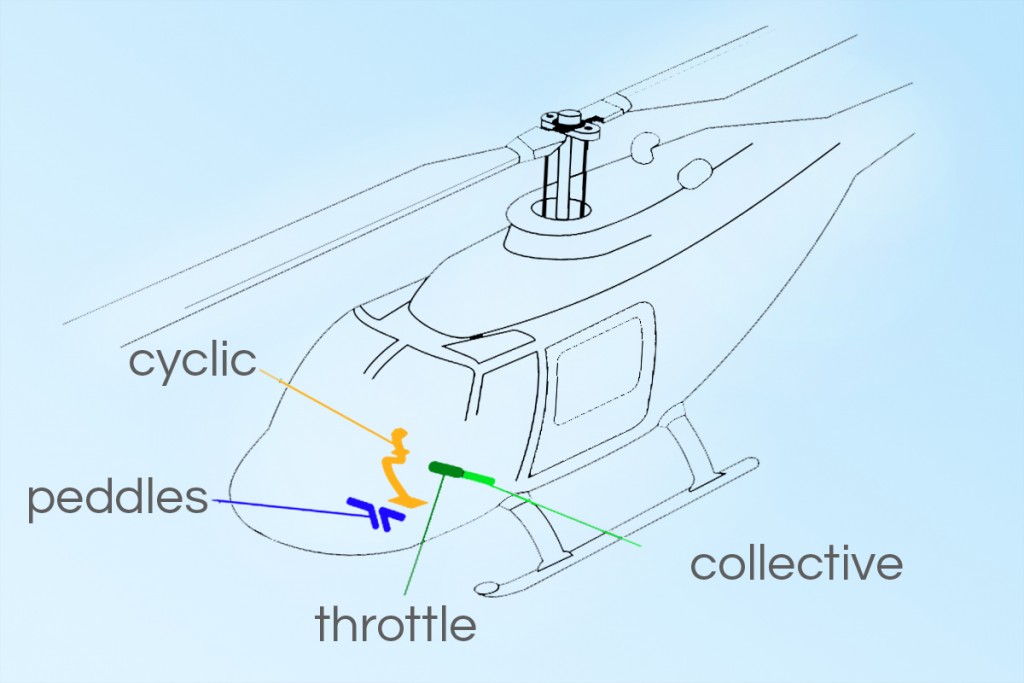 However, all of the above effects interact with each other, so changing one of them in a steady, fixed hover requires that the others be altered in a co-ordinated way by the pilot to compensate and maintain the hover. This co-ordination is further complicated because most helicopters are unstable, meaning that they require that the pilot input constant corrections on the controls. In contrast, aeroplanes are stable; if a pilot is flying one and takes their hands from the controls, the aeroplane will keep flying, barring external factors, such as turbulence, mountains or enemy aircraft. If a pilot was to stop actively flying a helicopter, the helicopter will go out of control and start oscillating wildly, which makes it a lot harder for pilots to look cool, and tends to upset the passengers.

Controlling a helicopter hovering in the same place is probably the most challenging and interesting part of learning to fly one – due to the precise mental and physical co-ordination required, it has been described as “like trying to spin plates whilst reciting the alphabet backwards in Urdu!” (Presumably, plate-spinning circus performers from Pakistan make good helicopter pilots).

Trainee helicopter pilots are taught one control at a time in the hover to begin with; the instructor will then add more controls until the trainee can hover accurately and safely. Like driving a car, or riding a bicycle, hovering is a rewarding skill that becomes almost subconscious with practice, and practice leads to the ability to control one of the greatest and most versatile capabilities of the helicopter; the hover.