Ben Koprowski
In the not too distant past, a multi-engine piston (MEP) rating was a logical step after completing a Private Pilot’s License (PPL) – but as aircraft aged without replacement designs, and fuel costs soared, the number of multi students drastically reduced. Happily, new aircraft designs are now again putting twin engines within reach of the private pilot. Here, we look at the benefits of going twin engine….

You’ll need at least seventy hours total time under your belt to start an MEP rating, which requires at least six hours of flight training, plus ground exam and flight test.  Much of the training focuses on EFATOs (engine failure after take-off).

Since virtually all twins have wing-mounted engines, a failure at low airspeed will produce a sharp yaw to one side, as the working engine now induces an unbalanced sideways force. Since the amount of control available to a pilot increases with speed, a failure at low speed requires prompt and correct action before the aircraft slows below a critical speed.

The reduced altitude (and therefore margin of error) just after take-off means that the majority of your twin training will centre on building sufficient skill to correctly handle the aircraft, and safety climb away, during an EFATO at relatively low speed. 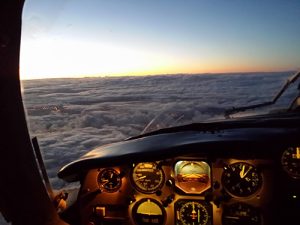 This firmly placed twins into the “expensive long range touring” category for private pilots; those who need to make regular water or mountain transits, or travel very long distances, found that the extra payload, speed and safety outweighed the considerable cost (often three or sometimes four times that of a single-engine tourer).

Recently however, new and emerging twin designs have combined the lower cost of traditional single-engine tourers with twin safety. They do this by utilising very aerodynamically efficient and lightweight airframes, coupled with new fuel-efficient diesel engines, or by combining smaller engines with a smaller airframe. These new types don’t carry quite as much payload or cruise as fast as traditional twins  – but they do provide twin safety and reasonable payload, at more or less the same cost as a traditional single touring aircraft (or new ones, come to that).

Whilst many traditional twins remain, and provide larger payloads carried faster across long distances, the new crop of twins have made significant inroads into both the commercial and private pilots spheres, bringing twin safety back within range of the private pilot. After completion of your license, you may well wish to double up into the world of multi-engine flying, and reap the benefits!

Flight Simulators - Are they real enough?