When preparing to go flying, every pilot, from the captain of a Boeing 747, to the pilot of a microlight, must consider a number of factors in order to determine that they can safely complete the flight – including weather conditions, aircraft serviceability, and the pilot’s qualifications and experience.

There’s a lot to get through here, so over the course of the next two articles, we’ll explain how these considerations apply to you, the private pilot, and how a decision to go flying – or not – is reached.

Most private pilots will start their decision making process by assessing the weather conditions. The majority of pilots operate to a set of specific weather minimum conditions; for example, when you gain your Private Pilot’s license, you’ll have been trained to fly by Visual Flight Rules (VFR) weather minima. These (legal) minima specify the lowest in-flight visibility, and distance from cloud a VFR pilot should fly in. 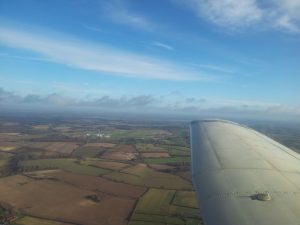 This allows you, as a visual pilot, to both safely maintain control (a visual pilot needs to be able to see the visual horizon in order to safely control the aircraft), and to also navigate by visual landmark features. Happily, during your PPL course, your friendly and somewhat cunning flight instructor will have also ensured you are trained to safely exit clouds, using the aircraft attitude instruments, should you accidentally find yourself inside one.

Wind speed and direction also play a factor; if the prevailing wind means that an aircraft taking off will experience more than a certain crosswind on that runway, then the pilot may not be able to maintain runway direction (which can make the takeoff more exciting than planned). Each aircraft type will have differing crosswind limitations, so wind does not feature in the legal VFR minima.

Pilots may also find themselves further restricted by their flying club rules, or may have their own personal minima, decided by the pilot as a personal limit in order to provide an extra buffer of safety. And after all, private pilots will mostly fly for fun, not to battle the elements. Commercial pilots will be bound by their company’s minima – which can specify in incredible detail the weather conditions they may operate in. Professional pilots will also have been trained to fly to Instrument Flight Rules (IFR) during an Instrument Rating, which allows safe flight and navigation in cloud and at night (you can also add this rating to your private license).

We’re fortunate in the 21st century we have a wealth of very high quality meteorological information that can be used to accurately assess the probable weather during the course of a flight, available via the internet (although it’s also worth noting that despite a plethora of high tech forecasting models, weather predictions still do get it wrong from time to time!).

Since comparing forecast conditions to a pilot’s minima is the first port of call, if the pilot is comfortable with and able to legally operate in the weather on the day, the pilot can then consider…

The length of runway an aircraft requires to take off will depend on a number of factors; aircraft mass, air temperature, runway altitude, runway surface and condition, air pressure, wind, and aircraft condition (for example; older engines can sometimes produce less power than they did when new). For each aircraft design, the manufacturer will have produced performance data, the result of empirical flight tests that determine how much runway an aircraft will use, depending on the conditions above. This data can then be used by a pilot to calculate the takeoff distance required for the prevailing conditions.

If a pilot is operating commercially, they will then add an extra safety factor on; this varies from country to country, but is normally around an extra third. This is a legal obligation for commercial pilots – but private pilots are only strongly recommended to do so. It’s probably worth noting that this extra safety factor will account for less than perfect technique, a slightly underperforming engine, and any errors arising from the fact that the conditions used for the calculations are often estimated ones. Hopefully, this distance will be less than that available from the runway – if it isn’t, then the most common solution is to lighten the aircraft by taking less fuel or passengers – or to simply not attempt to go.

Private pilots won’t always do this calculation in full (a good proportion of UK airfields are long enough that it can be given that you have enough space to take off) but a good pilot will always consider aircraft performance, and if there is any doubt, carry out the calculation.

Intertwined with the performance calculation is determining the aircraft’s mass and balance. Every aircraft will be certified and tested to carry a maximum amount of fuel, cargo and passengers; if more than this is carried, then the aircraft’s performance will be invalid (i.e. the aircraft will take much more runway than predicted to takeoff, or not at all, and will be burn more fuel for a given distance to fly than specified, plus other negative effects). 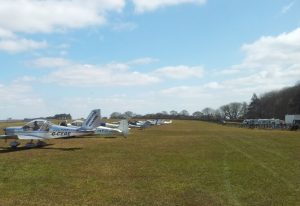 Any payload must also be correctly positioned – too much weight fore or aft can exceed the ability of the aircraft’s tailplane to produce a stabilising force – making an aircraft too unstable to safety control, or making the aircraft so stable that it’s impossible to produce enough control force to rotate the aircraft up into the air upon takeoff (that is to say; it won’t, and the flight will probably be rather brief, and rather interesting).

Overloading or unbalancing an aircraft can be very dangerous – as well as the possibility of not being able to take off and control the aircraft, if the pilot does have an accident flying an overloaded aircraft, the insurance company will probably decline to pay out. This, traditionally, can really spoil your day.

Aircraft load must of course also include enough fuel for the route to be flown – plus a margin of error. Pilots are generally taught to carry enough fuel for:

If this minimum required fuel cannot be carried and still stay within the mass and balance limits – then unfortunately something or someone else must stay on the ground.

That’s your lot for this week – tune in next time for more on serviceability, pilot currency and pilot condition!

Setting Up Your Own Airstrip