Flight Simulators – Are they real enough?

Paul Merry
If you’ve ever looked at one of those big bulky full-motion flight simulators wobbling around seemingly without rhyme or reason, you’d be forgiven for thinking that they might be better for simulating sea sickness than anything approaching a realistic flight experience. From the outside, what looks like a set of huge hydraulic legs pushing a box up and down in a jerky fashion is not what one would expect when trying to represent the smooth progression of an airliner through the skies to the pilots inside. 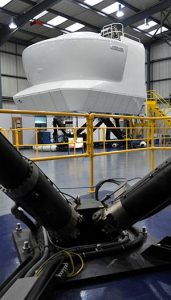 The reality is different – today’s flight simulators are utterly convincing and within minutes of stepping inside most people forget they are inside a simulator and think they are in the real thing.

Professional simulators cost millions of pounds to build – but that was not always the case and there is a place today for simple simulators such as the very successful Microsoft Flight Simulator series when learning to fly. Using it can help the trainee pilot learn more about the layout of their instruments and how they interact with each other when flying – some professional pilots also use it to view airports that they have not flown into before.

The Link Trainer was one of the first flight simulators. Invented in 1929 out of the need for a safe way to teach new pilots how to fly by Mr. Edward Link used his experience and knowledge of musical organs to create a flight simulator that responded to the pilot’s controls that gave an accurate reading on the instruments by feeding air to them to represent flying. More than 500,000 US pilots used the Link Trainer as did many members of the RAF during World War II. 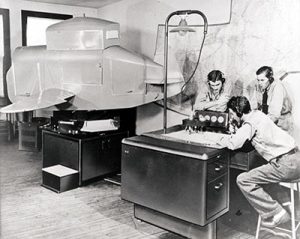 The Link Trainer did not have a visual representation of the view out of the cockpit but this changed as technology advanced. One method of providing a view out of the front of the aircraft was to ‘fly’ a small camera along a model that represented the ground that the aircraft was flying over. This image would then be projected onto a screen in front of the pilot outside of the cockpit and when combined with the instrument display provide him with a good representation of flying the aircraft.

…but this was nothing like the computer generated images of today’s flight simulators. They are utterly convincing!

The switches in professional simulators are exactly the same as those in the real aircraft, the instruments the same, the noises similar and, in many cases, the seats have the odour of a familiar leather chair. When sat in the seat a marshaller may give you the thumbs signal that it is ok to start the engines of your Boeing 737 or fire truck might pass by.

Once the engines are started, you can advance the throttles and taxi to runway exactly as you would in the real thing – except that you will have forgotten you are driving a simulator by then and think there are 100 people sat behind you waiting for the in-flight service to begin.

Did you turn the seat-belt signs on? Check those. The simulator when chime when they are turned on as in a real aircraft.

The flaps are set, takeoff clearance obtained and the throttles pushed forward steadily to allow the engines to ‘spool’ up. A real Boeing 737 wants to fly at about 140knots as does, unsurprisingly, the simulator. At this point a smooth rearwards movement of the control column in front of you to put the nose at about 12 degrees above the horizon is what your instructor is looking for. Looking inside at the instruments gives you a clue that a positive rate of climb is being achieved and the landing gear can be raised using the wheel shaped handle in front of you – the simulator ‘clonks’ as the non-existent wheels come up and lock away.

It is totally convincing. 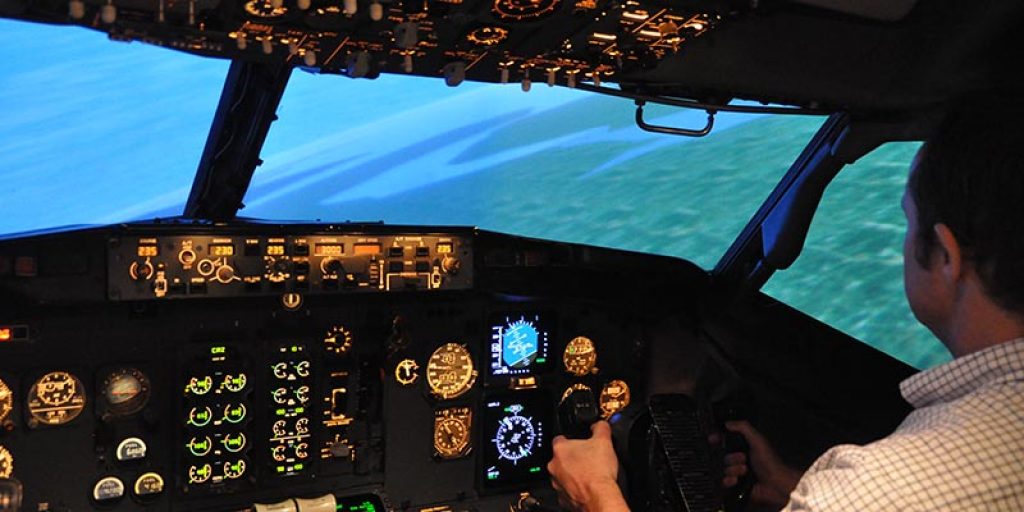 So much so that professional pilots are generally put through testing in a simulator every 6 months to ensure that they can still handle the emergencies that an aircraft could present them with.

Thankfully today’s aircraft are very reliable and advances make air travel one of the safest ways to travel – and this is partly due to the advances in simulation and their use in training.