As well as allowing a pilot to experience magnificent nocturnal views, being qualified to fly at night provides greater capabilities (and safety margins) than a day-only license. Here we outline the training and techniques required for night flying, and the extra benefits for a PPL in doing so.

On passing your final Private Pilot’s License skills test, you’ll be entitled to take to the skies in reasonable weather conditions during daylight hours. Private pilots can then complete further training to fly safely in a greater range of weather conditions (the Instrument Rating), and also at night (the Night Rating); both focus on how to fly without a visible horizon.

Perhaps obviously, night-capable aircraft will have external and internal lighting, plus a headtorch or two for the pilots, (spare batteries are highly recommended), suitable navigation equipment, and a full instrument panel. Until a few months ago, a C of A aircraft (Certificate of Airworthiness, i.e. factory built and maintained by an engineering company) was required to legally fly at night. However, the UK Civil Aviation Authority has recently announced that some Permit aircraft (aircraft maintained by their owners, and in some cases built by them) that meet certain standards are now permitted to fly at night.

From the earliest stages of training, all pilots are taught to control the aircraft via visual attitude; that is, how the aircraft is positioned relative to the visual horizon (nose high to climb, or rolled to one side at a certain angle to turn, and so on). Therefore if the pilot cannot see the horizon – if the aircraft is flying at night, or in cloud – a panel of instruments must be used to derive the attitude information necessary to control the aircraft. This is easier said than done! There are a number of pitfalls to avoid, and techniques to apply, that are absolutely essential to safe instrument flight; for this reason the standalone PPL includes basic instrument flying as a ‘get-you-out-of-cloud’ emergency manoeuvre only. 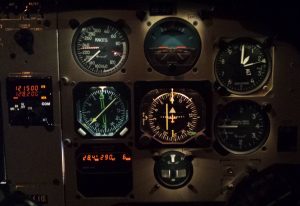 Night training builds on this introduction to allow a pilot to conduct the entire flight on the ‘panel’: which normally includes a gyroscopic artificial horizon, directional gyroscope, airspeed indicator, altimeter, and rate of turn indicator. Once the proper control techniques have been mastered, then the student will progress to night landing and navigation.

Ideally, night landings must be made at a suitably equipped airfield. Whilst flying clubhouse tales abound of intrepid souls landing using a pair of strategically placed cars at the end of the runway, we certainly don’t recommend doing so! Suitable airfields are generally equipped with ground guidance lights, all the way from hundreds of LED lights delineating the entire runway and taxiway system, to simple rows of lights along the runway edges. Some unmanned airfields use lights that can be turned on and off by the pilot, via radio. 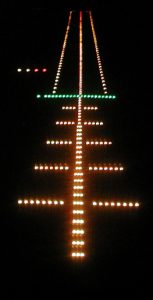 Since human perception of approach angle during landing is vastly reduced at night (due to far less visual cues, such as the surrounding terrain, being visible) some airfields are equipped with path guidance systems (Precision Approach Path Indicators, or PAPIs). These consist of four lights with coloured filters and calibrated lenses. Each lens is calibrated to change from a white light to a red at different viewing angles; i.e., if a pilot were too high on the approach path, each light would appear to be white. Two reds and two whites would indicate the correct path, and all four red lights would mean the aircraft is too low.

The training includes a minimum of five hours flying; of which at least one hour must be a cross country trip. At least one of the five hours must also be solo, including at least five solo take-offs and landings. Happily for some, there is no ground exam or flight test! If you aspire to a Commercial Pilot’s License, you must have already completed the night rating before starting the course. Timing can be key; normally, flying schools will only conduct night training between October and March (when the clocks change), in order to fit in with airfield opening hours.

Day navigation techniques include fixing your position using ground landmarks, electronic navigation aids (such as GPS, or ground based beacons), or a combination of both. At night, nearly all ground landmarks become invisible – except the shapes of towns and cities, outlined in the yellow glow of street lighting. In addition to using these shapes to determine your location (it’s surprisingly easy to identify cities from shapes at night – the standard issue UK charts feature cities outlined in yellow for this reason), greater emphasis is placed on using radio navigation beacons and GPS during night navigation, expanding on the navaid training provided at the PPL level.

The ability to fly at night also gives you extra safety margins over daytime only flying. Official night begins at sunset plus thirty minutes, and ends at thirty minutes before sunrise. More than one day only pilot has scraped back into base right on the permissible limit before official night (in this case, it’s often traditional to stand a round at the bar for the all the airfield staff you’ve kept waiting!). Others have been compelled to divert to a larger, night-capable airfield nearby, at the cost of extras fees, time and inconvenience.

It’s often the case that unexpected delays often mount up, in a perfect application of Murphy’s Law; nobody is available to refuel your aircraft for the trip home, the taxi takes an extra half hour to arrive, a stronger than forecast headwind slows your trip back, and so on. Having the ability to land after night gives you that much more margin for delay, especially in the winter months.

And of course, night flying can grant access to some spectacular night time vistas; a beautiful carpet of streetlights underneath you, with a full moon above has to be seen to be believed. We can highly recommend stretching your nocturnal wings.

Flight Simulators - Are they real enough?