One look at a Tiger Moth and you can tell it’s truly one of the legends. There is an air of mystique that surrounds every one of these machines. Pilots never forget the Moth and always speak fondly of it.

The de Havilland DH 82 Tiger Moth was designed by Geoffrey de Havilland and operated by the RAF, amongst others, as a primary trainer.

What does that mean? 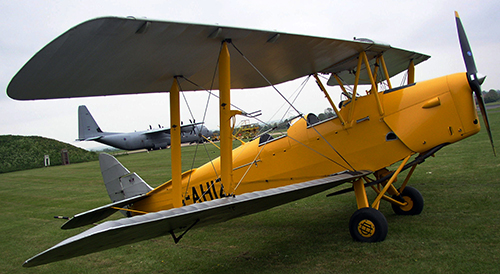 It was the aircraft that many Second World War pilots cut their teeth on. It was, and still is, not a difficult aeroplane to fly – but very hard to fly well. That was what made the Tiger Moth different to other trainers of that era and is why the RAF and many other air forces of the world, including the Royal Canadian and Australian Air Forces, chose it for initial pilot training.

Named after the Isabella Tiger Moth that inhabits cold regions including the Arctic, the Tiger Moth remained in service with the RAF until it was eventually replaced by the de Havilland Chipmunk – another legendary aircraft from the same manufacturer – in 1952.

To this day, the Tiger Moth is still used as a primary training aircraft, particularly for those pilots wanting to gain tailwheel experience before moving on to other tailwheel aircraft. Most Tiger Moths have a skid instead of a wheel underneath the tail and this means they tend to be flown from grass rather concrete runways.

Unlike more modern light aircraft, a Tiger Moth needs to gain an amount of speed before the smaller wing at the back of the aircraft ‘flies’ and lifts the tail off of the ground. The bigger main wheels remain on the ground at this point. This also means that the pilot cannot initially see where they are going and is another reason it was used for training – it made baby pilots look to the front to see where they were going!

The RAF initially ordered 35 dual-control Tiger Moths, i.e. with a control stick in both the front and rear cockpits, before a subsequent order was placed for 50 aircraft powered by a more powerful engine. Eventually the RAF had 500 of the aircraft in service and a surprisingly high number of the total 8800 or so Tiger Moths that were built remain flying today. 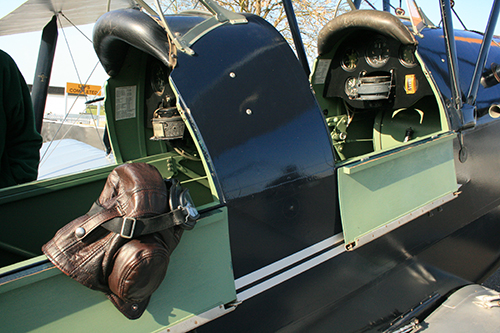 Climbing into an open Tiger Moth cockpit is, to use a cliché, like stepping back in time. In Summer skies, the open cockpit transports the pilot back to the Second World War whilst Winter flying means extra layers and thick gloves. The Canadians fitted plastics canopies to theirs in order to give the pilots some protection against the cold skies over Canada.

Switches are in awkward places, the compass is between the pilot’s legs and, as said above, one cannot see ahead of the nose until the tail flies. On the ground this mean the pilot has to weave left and right to make sure obstacles, and other aircraft, are missed. The upholstery is generally leather and there is not an LCD in sight. The propeller has to be turned by someone outside of the aircraft in order to start the engine – this is by no means easy – but once going there is no mistaking the sound and gentle thudding of the Gipsy Major engine. Note the spelling of Gipsy – Tiger Moth enthusiasts are very particular about this.

Once flying, the Tiger Moth needs constant attention to keep flying straight and there is no time for the pilot to be complacent. Turning needs the skills of a ballet dancer to work the rudder at the back of the aeroplane – but don’t forget the above, the Tiger Moth is easy to fly, but hard to fly well, and that is why it will always be a popular challenge – and an iconic piece of flying history!

Want to try a Tiger Moth Yourself? Check out these great deals!

Which Pilot's Licence is Right for Me?